Hellbound in a Hurry Excerpt 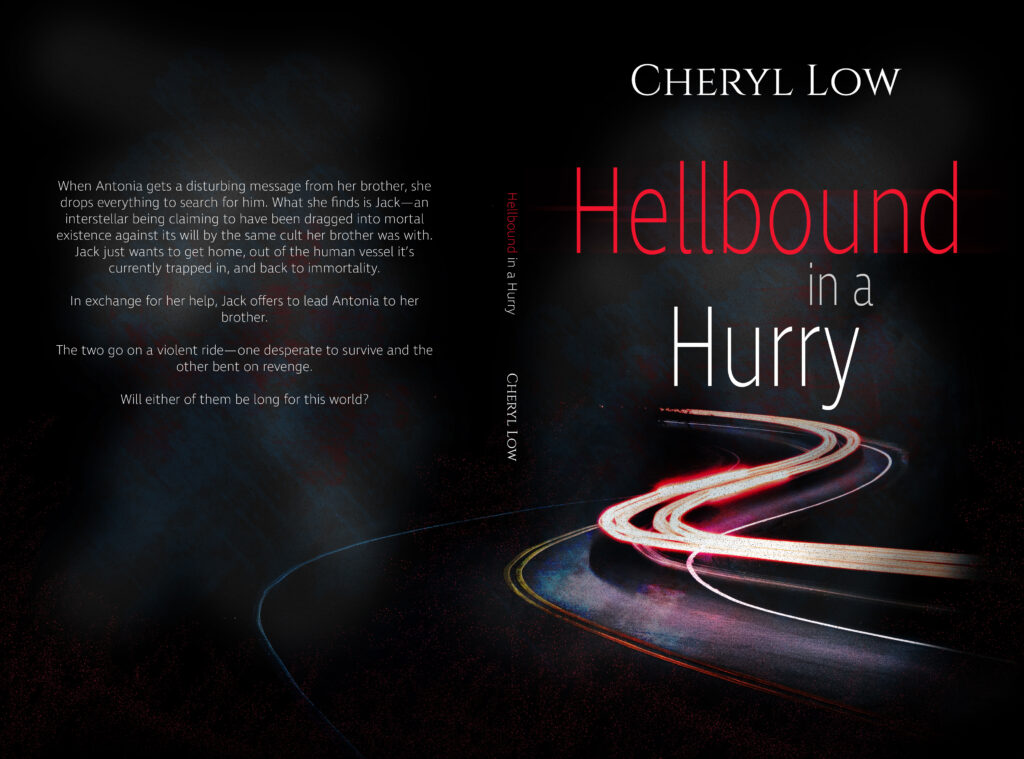 HELLBOUND IN A HURRY comes out in 2 weeks!

When Antonia gets a disturbing message from her brother, she drops everything to search for him. What she finds is Jack—an interstellar being claiming to have been dragged into mortal existence against its will by the same cult her brother was with.

Jack just wants to get home, out of the human vessel it’s currently trapped in, and back to immortality. In exchange for her help, Jack offers to lead Antonia to her brother.

The two go on a violent ride—one desperate to survive and the other bent on revenge.

Will either of them be long for this world?

This horror novella is my first self-publishing project and I’ve learned so much.

This was a completely new experience for me and it’s been a lot of googling. I found a wonderful editor to work with, Rachel Oestreich of The Wallflower Editing, LLC and the process was so smooth. If you’re looking for an editor, I would happily recommend her.

I’ve also learned the hard way why people pay to have their books formatted–that was tricky. I have never known Word more intimately and thank goodness for googling.

And cover art by Linn Arvidsson! It was a pleasure to work with her again!

HELLBOUND IN A HURRY is up on goodreads, so please take a minute to add it to your TBR!

Chapter One of HELLBOUND IN A HURRY

Dominic ran over the uneven ground, away from the voices and the flicker of flashlights, and definitely away from the glow of the old greenhouse. He ran toward the arms of darkness in panic and desperation—the only way anyone ever did.

His right ankle throbbed, sending jolts of pain up his leg with every step, dragging him lower and lower. No matter how much he blinked or how wide he opened his eyes, he couldn’t see, the branches overhead so thick that not even starlight could reach him now. There was no way he could escape—nowhere he could go—but he couldn’t stop trying. His arms stretched out ahead of him, scraping against trees in an effort to navigate. He had no direction—needed no direction but away. He was a bird in flight.

The white beams of flashlights strobed through the night to his right and left. Dominic hadn’t realized he was crying until those lights gave him a taste of his own vision, blurred.

A light flashed right over his shoulder. He was sure of it, as though he could feel the heat of the lamp through his sweatshirt.

His right ankle finally gave out and he fell hard, rolling in low bushes and newly fallen leaves. He clawed at the cold ground, dragging himself into the dark. Footfalls came closer, stomping the autumn ground.

Dominic’s short life flashed before his eyes, and he found it lacking. Too much panic and pain and not enough joy, not enough contentment or laughter. Too much running for his life and looking for a place to sleep. Too much hunger.

The beam of light struck him in the back, pouring over him. His dark hair hung in his face, sticking to sweaty skin, and his dirt-coated fingers groped at the mulch of the forest floor. The ink on the backs of his hands stood out in the light, the word ‘hands’ tattooed on the back of his left and ‘up’ on the back of his right in scrawling script. A part of his frantic mind registered the words and imagined a voice with the flashlight calling them—shouting at him in the night under the flashing glow of red and blue lights. But that had been in another place and another time. Not here. Not tonight. These people had no demands of him because they wanted to take everything.

A hand grabbed his shoulder, turning him over and groping at his side, trying to lift him up. Dominic swallowed for air, vision still blurred in tears when the man pulled him to his feet. Dominic kept his weight on his left this time, one hand grabbing the man by the shoulder for stability while his other arm lifted and swung the rock he had picked up from the ground—leaving a crater in the cold earth. He slammed the rock against the man’s temple, hard enough to hear the clap of flesh and crack of bone. The flashlight fell, half-buried against the crisp leaves.

Dominic swung again and again, in brutal succession, until the stranger landed on his knees and then slumped over. He was still breathing, the sound of it raspy and wet. Dominic patted him down in a hurry, found his phone, and took it.

He turned off the flashlight and hopped away, using the trees to keep himself upright in the dark and moving away from the sounds of the search party. He didn’t stand a chance. He couldn’t get far like this, in the dark and with only one leg to stand on. He slid down a slope and crawled into the base of a tree, hoping it would hide him from the search lights.

Dominic turned the phone on, holding it close to his chest and curling his body around it. He dialed the only number he knew by heart and choked back a sob when it rang and rang. “Please,” he whispered to the night.

He didn’t know her work number. He dialed again.

The beam of a flashlight stroked the night far to his left and he pressed the phone to his chest to hide the glow. When the light passed, he held the phone to his ear again. The automated answering machine recited the number to him and suggested he leave a message. Not even her voice. He almost forgot how to speak when the beep sounded, coughing and dragging a breath in. “Annie… Please…” He cried and cringed, hating himself for doing this. “I should never have gone with them. You were right… Please. Please help me.”

Logic told him there was nothing she could do now, even if she had answered. He was torturing himself and he was torturing her. “Annie, they’re insane. They’re going to kill me, or I’m going to die in this fucking forest, and I just want to leave.” He choked back a mad laugh. “Save me. Please. Please. Just one more time. Save me and I promise I won’t do dumb shit like this anymore. I promise, I’ll get my shit together. Please, Annie. Please.”

Four beams of light fell on him, hands grabbing from all directions. Dominic screamed when he was lifted from the ground, not even ashamed of that high-pitched sound echoing from his chest. There was no room for shame now—only fear and anger. Annie had told him, back when they were teens, that all other emotions were useless and frivolous. The only ones that would ever help them were fear and anger. She had leaned into it and made those feelings her home. Dominic had never been able to do the same, always aching for something better, something softer. He hated the wild, soul-gripping strength of fear, and the way it infected every part of his heart. And now, he was going to die with it as his last thought, his last friend, his last anything.

They dragged him screaming from the woods and into the clearing, the glow of that old glass building pulsing in the night. He flailed, but they were more than enough to keep hold of him. The phone was gone, he realized. Had they taken it and hung up or left it there in the woods?

The door opened, dozens of figures standing around in their robes and hoods. Cliché motherfuckers, he thought but bit back the fury and begged instead—still hoping against hope. “Please! Just let me go!”

The figures swayed and moaned their strange, melodious chants, side-by-side like faceless lemmings in the dark.

The old greenhouse was warm, the space inside cleared but for an alter at one end and a long dining table in front of it. Their voices echoed inside, rising up against the dirt-coated glass walls. They had no faces—these people, he knew most of them. He had spent months at their compound thinking he had found a home, but it had all been a lie. He had been a fool, and Annie had been right. There was no easy out. There were no homes. Just monsters with hungry needs of their own.

Dominic let out another ragged scream, body bowing when they put him down on that table and cuffed his arms overhead. “Fuck you! I hate you! I hope you all die for this!” he shouted, feeling that rage pour into his heart like the infectious, molten substance it was. He laughed through his tears, his voice echoing over their chanting and moaning. They would die for this, he realized. They would all pay. But it was only a small comfort to him now—not nearly enough.

One man, without a hood drawn, stood up at the alter overhead, and Dominic recognized him. Benjamin stared back at him for a long minute. They had been in the same foster home for a year when they were twelve and reconnected a couple times since. The last time had been when Benny heard about this commune where they could get away from it all, “it all” being the gloom of the city, the shitty jobs Dominic could never quite hold on to, and the drugs that always left him feeling hollowed out and lost. It was supposed to be a place full of sunshine, fresh air, and freedom. But what had really convinced Dominic was the way Benny had said “family.” He promised that was what it was like, up here in the woods. That it would be like finally coming home—finally finding his family.

“Benny… I want to leave.” Dominic managed to choke out the words.

Benny winced subtly, the perfect mix of remorse and excitement all pressed under the numbing weight of his high. Dominic knew what Benny looked like high—his eyes glassy and red-rimmed and his mouth slack in the corners. He was shirtless, jeans riding low on his hips, and the candlelight made the sheen of sweat on his brown skin glimmer like stars.

The chanting grew louder, the robed figures pressing closer. Two of the hooded figures rounded the table, holding a stag mask between them. Dominic struggled, but they placed it over his face, the weight pinning his head back. It stunk inside, warm and animal. He screamed and the sound echoed back on him. He could barely see through the slits of the eyes, catching Benny’s face just before he donned a wolf mask and picked up a slender knife.

Dominic struggled anew, even knowing it was pointless. He struggled and screamed and kicked, sounds growing only louder when the knife sunk into his chest.

He realized, in the last moments of his life, that family had always been bloodshed and struggle. It had always been a fight to survive. But family had also been the people fighting to keep him alive. Family had been the one person that ever fought for Dominic. And he knew, without a doubt, that his last phone call would bring her down on these people like lightning on dry grass. They thought they knew some secret of the universe—that they could summon a demon.

But they had no idea that he had already called one.