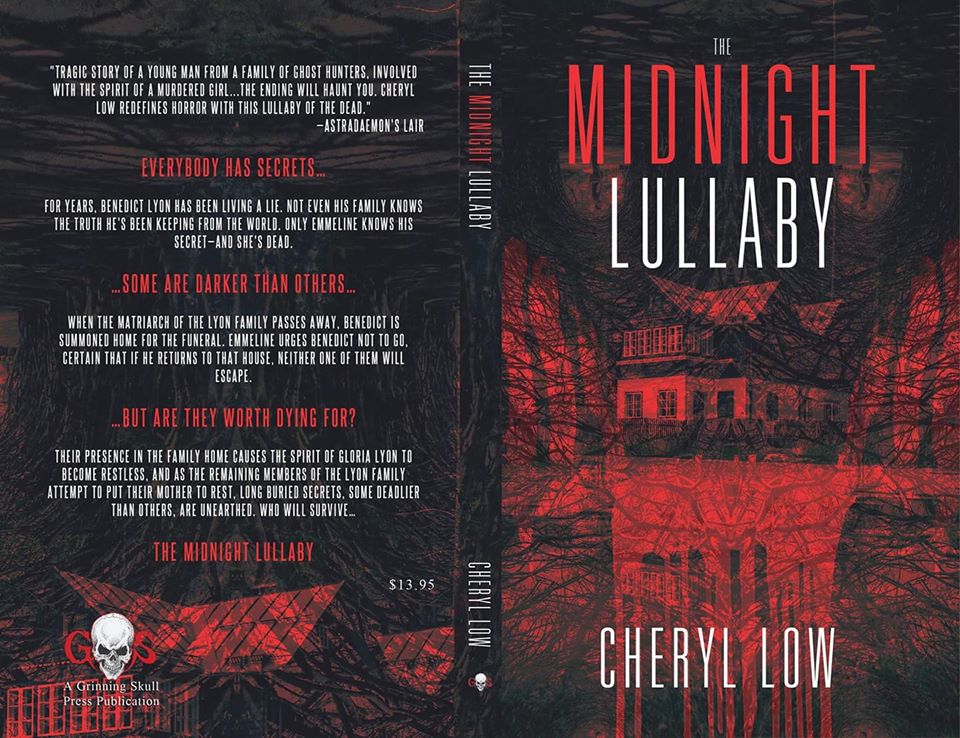 For years, Benedict Lyon has been living a lie. Not even his family knows the truth he’s been keeping from the world. Only Emmeline knows his secret—and she’s dead.

…some are darker than others…

When the matriarch of the Lyon family passes away, Benedict is summoned home for the funeral. Emmeline urges Benedict not to go, certain that if he returns to that house, neither one of them will escape.

…but are they worth dying for?

Their presence in the family home causes the spirit of Gloria Lyon to become restless, and as the remaining members of the Lyon family attempt to put their mother to rest, long buried secrets, some deadlier than others, are unearthed. Who will survive…

Benedict was eight years old, sitting on a stiff chair in the dark hallway of a house he didn’t know. He clamped his hands around the edges of his seat, trying to press his bones so tight that they wouldn’t shake. His head whipped from side to side, unblinking as he searched for shapes.

“Tell me where it is!” Gloria’s voice boomed from the room down the hall. Benedict winced, squinting to see through the doorway and into the wild flicker of candlelight.

The witch screamed, writhing on the floor at Gloria’s feet. She chanted between her howls, head thumping back against the floor and narrow chest pushing high. Even from this distance, and even with her screeches in the air, he heard her bones cracking.

“Give me the book!” Gloria roared.

Wind rushed through the house, knocking the pictures from the walls. Windows cracked in their frames. Doors opened and closed with furious bangs upstairs.

“Can you see them?” Elysium whispered.

Benedict gulped ragged breaths, fear marching a parade through his chest with the big drums in his ears. “No.”

His brother sighed, the teen crouching in front of Benedict. “Benny, there.” He pointed down the hall, toward the open doorway and their mother’s booming voice demanding to know where the spirit-wielder hid her book of secrets. “There. You see that one? He’s big. You have to see him.”

Benedict cried but didn’t blink at the tears, staring down the hall through a liquid haze. He saw the doorway and the lights inside and his mother’s shadow cast across the twisting woman on the floor. “There’s no one in the hall,” he confessed.

The floorboards squeaked; he saw them straining and heard the heavy footfalls coming toward them, but he didn’t see the ghost.

“What’s happening?” Benedict begged, small voice almost lost under the raging of the house. He jumped at a scratching sound, claws on hardwood, and a sickly meowing.

“The witch is calling the spirits she’s trapped here,” his brother explained.

“Will they hurt Mother?” Benedict asked, still staring down the hallway. The heavy steps getting closer.

“Do you see him yet?” Elysium asked rather than answering, head whipping back and forth, watching something in the empty hall and studying his baby brother.

Benedict wrinkled his nose, trying not to cry.

The floorboards creaked closer and closer, his little heart fluttering wildly in his chest.

“Benny, you see him, right?” Elysium shouted over the groaning walls and wailing woman—over the scratching and the creaking and that awful meowing. “Benny—”

Benedict screamed when something pulled Elysium away from him and dragged his older brother down the hall, tossing him into a dark parlor with a heavy thud.

Benedict jumped down from his chair and ran after him, tears spilling over his lashes. He didn’t see whatever they saw, but he knew it was real. He looked around at the empty chairs and couches, his hands balled into fists against his sides. “Elysium?” he whispered.

A thump on the wall drew his gaze up, eyes straining and vision blurring at the edges.

His brother was there, pinned against the wall by an unseen force and held so high up that the top of his head almost brushed the ceiling. Elysium rasped in ragged breaths, heels kicking against the wall.

Benedict backed up, unable to look away until he bumped into a closet door. The scratching grew louder, the yowling from inside desperate. He twisted around and stared at the doorknob.

He knew he shouldn’t open it, but a whisper told him he had to. Something was inside…  something that needed out.

The boy reached up and used both hands to turn the knob. The door opened with a pop, and he shuffled back from it. For one blessed moment, the scratching stopped, the meowing went silent, and then the mangy monsters poured out. Cats, twisted and thin, half-decayed but still moving. Their claws scratched against the floor, never retracting into their paws, some with no meat to call a paw anymore. One looked up at Benedict, an empty socket and the glint of bone flashing at him. It meowed, and he could see the vocal cords rattling in its neck where the fur and flesh were missing.

He screamed, but the house only grew louder, trying to smother him.

And then he was off his feet.

For a second, he choked on his sounds, terrified that the ghost had snatched him up like it had Elysium, and then he inhaled and knew exactly whose arms he was in. His brother held him against his shoulder and ran from the room, kicking the door shut behind them. He didn’t stop, running straight down the corridor and toward the sound of their mother’s voice. Benedict buried his face in that shoulder, rubbing his tears out in the fabric of his shirt and hoping even now that Mother wouldn’t notice how he had cried.

Elysium put him down on his feet in a corner of the room, kneeling in front of him and pulling a piece of white chalk from his vest pocket. Benedict, drowning in his own fear, couldn’t stop gasping for air. Elysium drew a half-circle on the wood floor from wall to wall, closing Benedict into the corner, and then started sketching runes over the edges of the circle. “Don’t move,” he yelled over the storm of spirits.

Benedict bit his lip to keep from whining, looking past Elysium at the woman writhing in the middle of the room. She clawed score marks into the floorboards like the cats had, her orange hair long and knotted around her face and shoulders. Her boots thudded and kicked, but she couldn’t get away, pinned there on the ground by Gloria Lyon’s will. His mother stood over her, her dark hair braided over one shoulder and her sharp, black suit making her look like a shadow come to life. “Relent the book. Release the spirits. And I will spare you,” Gloria shouted, unmoved by all the shows of power the other woman had displayed—by all the fury of her creations in this house.

The woman on the floor screamed, and Benedict could hear windows breaking.

Elysium cupped the sides of his face in his hands, making Benedict look at him rather than them. “Okay, Benny. You know how this works.”

Benedict swallowed hard, trying again not to cry. He nodded once, and Elysium flashed him a smile.

The battle of wills continued to rage on, screams and thuds rampant in the house, but he didn’t open his eyes to see. He pressed the heels of his palms into his ears when the screaming grew to be too much, shaking his head when he heard Elysium cry out in pain and gasping for air when those horrible yowls grew closer and closer.

But he didn’t open his eyes. Not until the house had finally gone quiet hours later. Not until his mother picked him up from the corner and carried him out of the house. She put him in the back seat of the car, and he waited. When she came back, Elysium was with her, one arm broken and folded to his chest and the other carrying a worn, leather-bound notebook.

Benedict blinked out the window. The sun peeked over the houses down the hillside in bright wisps of pink and orange. When the house they had come from went up in flames, it wasn’t wisps of orange like the ones in the sky. There were no shades of pink. Just violent, furious heat.

Gloria had not spared the woman inside—not even when she gave up her book and released the spirits she had bound to her home.

Even Benedict, at eight years old, had known she wouldn’t show mercy. It wasn’t her way.